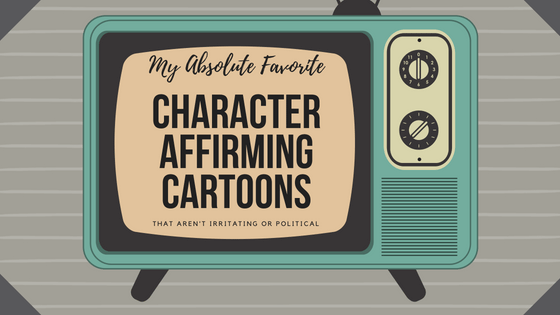 A few months ago, my oldest son was obsessed with the Netflix series, “Spirit”.  It’s about a city girl who moves to the 19-century wild west and has everyday adventures with her beloved horse.  It’s targeted towards pre-teen girls but my 5-year old son loves the horses and fast-paced adventures. The show seemed harmless and I honestly really love the opening song. (It’s sung by the crazy talented Maisey Stella from ABCs Nashville television series. She’s so young but her voice is incredible.)

One day I sat down and watched an episode with him while folding laundry.  I was quickly appalled.   The episode revolved around the main character, 12-year old Lucky, finding a horse she believed to be abused. She sneaks out of her home, breaks into another person’s home, STEALS THE HORSE and eventually confronts and reprimands an adult.  She is rude, self-righteous and a brat.   In another episode, she ignores her father’s explicit instructions, travels where she’s forbidden and ultimately endangers the lives of her friends.  This direct defiance is portrayed as merely a “mistake”.  The entire show consistently reinforces the notion children can (and should) be disrespectful and condescending to an adult if they decide there is injustice.

I asked my son what he thought about her actions and without hesitation he repeated the mantra that’s engrained in almost EVERY modern cartoon, “She followed her heart.”

Bingo.  Following your heart is the ultimate goal in almost every popular children’s cartoon.

NOT SO HIDDEN MESSAGES

A majority of modern cartoons have political or social justice themes woven into the storyline. Regardless of your political affiliation, you can’t deny that children’s cartoons are being used to send messages to young audiences.  That’s not what upsets me. Some of those issues are important and powerful. Political and cultural messages have always been interwoven into cartoons and fairy tales.  In fact, literary fairy tales have historically been a social gage on culture and current politics. Fairy tales, cinema and now children animation is a direct reflection on our cultural values and current political climate.

But you know what’s NOT addressed anymore?

Historically, classic cartoons and fairy tales often had deeper meaning and influential messages. Modern cartoons are shallow and focus almost exclusively on the child’s worth, perfection and the child’s personal desires.  For example, Ariel in Disney’s the Little Mermaid is a rebellious, selfish teenager that is eventually rescued from her disastrous decision.  However, the original story by Hans Christian Anderson includes very painful consequences for her actions.

Again, conveying both political and moral messages through literary or narrative form has existed throughout history. Folklore stories used to be graphically clear with stories to scare children into compliance. For example, the original Three Little Pig story started off with the Momma Pig kicking her precious children out because they were lazy.  She told them to make their own way and get the heck out of her home.  Little Red Riding Hood didn’t follow instructions and she was literally eaten alive by a wolf.  That’s a powerfully motivating message.

This is a Battle.

Parents.  There’s no easy way around this issue. There’s no short cut.   I know you’re exhausted but

You. Must. Pay. Attention.

You must actively watch, screen and be discerning.  You should not assume the cartoon or entertainment is appropriate.  You should assume otherwise and treat this as a raging battle. For a sickening example, the recently released “Show Dogs” (2018) movie is rated PG and has a disturbing scene where a playful and funny character has his genitals touched. The character is encouraged to get used to it and find a “zen place”.  It’s supposedly the funniest scene of the movie.  Hilarious.

Older cartoons are slower paced, have terribly animation but typically have integrity and ethical messages interwoven.

I’m not implying wisdom can’t be found in modern animation. And granted, some older cartoons have harmful messages as well.    I’m asking you to be careful and aware of what messages are being funneled into your baby’s minds.

So what are my favorites?

I often let my kids watch cartoons that aren’t my “favorite” (like Paw Patrol, Thomas the Train).    I will just push and suggest my favorites.

Go All In with Character Chips