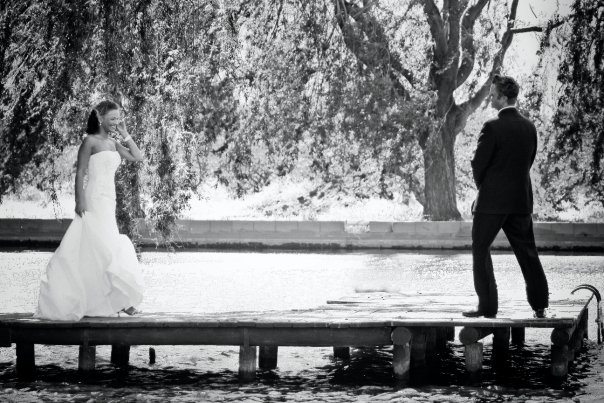 There were many things that went wrong on our wedding day.   Things go wrong during all events and every single wedding.  Watching the videos and looking at pictures has made me remember some of these “wrongs”.  For humor and documentation purposes I wanted to write them down so I didn’t forget.

But ya know what? Who cares?

On THAT day, Noah decided to marry me.  Me!

On THAT day, I was surrounded by my closest and most dearest friends in the whole world.

On THAT day, I became a wife.  A job and responsibility I dearly love.

On THAT day, I was walked down the isle by two of my favorite men in the whole world.

On THAT day, we were given the privilege of being married by one of our best friends.

I could go on much more on everything that went right.  The things that went wrong were just silly.     Some funny, some hurtful but all meaningless when compared to the gift I received April 25, 2009.

Marriage is hard and it reveals every ounce of selfishness in your life.  I love being a wife.  Noah is the best thing that’s ever happened to me.   I’d take all the “wrong” that day all over again.

It was the best day ever!

Therefore, as God’s chosen people, holy and dearly loved, clothe yourselves with compassion, kindness, humility, gentleness and patience. Bear with each other and forgive whatever grievances you may have against one another. Forgive as the Lord forgave you. And over all these virtues put on love, which binds them all together in perfect unity. Let the peace of Christ rule in your hearts, since as members of one body you were called to peace. And be thankful. Let the word of Christ dwell in you richly as you teach and admonish one another with all wisdom, and as you sing psalms, hymns and spiritual songs with gratitude in your hearts to God. And whatever you do, whether in word or deed, do it all in the name of the Lord Jesus, giving thanks to God the Father through him.

Go All In with Character Chips