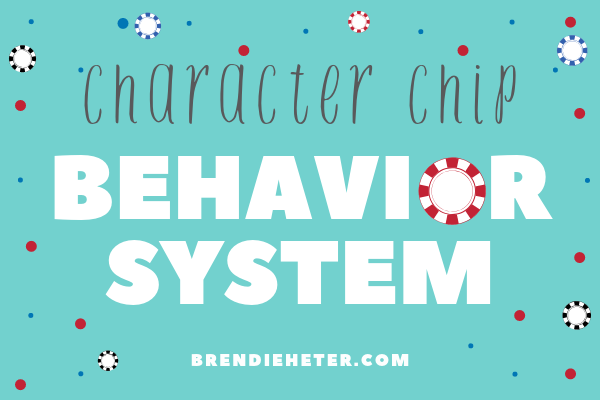 A simple child behavior system for kids 8 and under that focuses on character parents can implement immediately.

Raising three boys is hard work. There are days I don’t think I’ll survive the noise, chaos and bad attitudes. As they get older, the weight of parenting gets heavier. I see patterns and habits emerge that are worrisome and keep me up at night. I developed this Character Chip child behavior system that’s worked well for my younger kids. I’ve been asked to share my template in the hope it helps other families.

Everyone agrees (in theory) curbing bad attitudes early in children is important. But I’d like to suggest molding and encouraging character early is crucial and commonly overlooked. You can have an outwardly obedient child who lacks integrity and character. For example, I have one child who will seemingly obey but it’s often because he’s manipulating a situation or attempting to divert my attention. His defiance is often masked in…obedience.

Defiance in children may appear “cute” and sometimes it’s undeniably funny. However, let me ask you an important question. How will that same attitude manifest itself in 10 years? My brother, wrote a book entitled Dream House and he explained this mental challenge to parents.

“As I looked at my darling but defiant two-year old, I had a decision to make: Do I begin teaching her character now, or wait for another day (or year)? Mentally adding ten years to her age forced me to ask myself an important question: Do I want her acting this way when she is twelve? If I allow pouting and defiance of authority now and call it cute, I am asking for big-time trouble down the road. If I choose to let her disobey her mother and rationalize to myself, “She’s only two,” I’ll be setting up a major confrontation later. Selfish disobedience isn’t cute at two, and it’s downright frightening at twelve.”

A huge part of parenting is guessing and trying to figure out what strategy will work to shift behaviors and instill strong character. These are the systems I used and found great success with my young children.

When my boys were much younger (under 5) I used a fantastic Star Chart I explained previously on facebook.

The Star System works (and still works) very well. However, I believe it’s better suited for toddlers and preschoolers. It will work especially if you have a “type A” child who likes structure and systems. I used the Star Chart in conjunction with a Morning Checklist for Preschoolers and it worked amazingly well.

As my boys grew older, I found myself wanting a more robust behavior system. The stars were still motivating for my 3 and 2 year old but my 6yo needed more specifics.

After much deliberation, we came up with this “Character Chip” system. I’ll be honest – I’m quite proud of this project. The boys have really taken to the concept and attitudes in our home have dramatically shifted. It’s been exciting to watch my boys self-manage and catch themselves before losing a chip. They are very concerned about losing “character” and I enjoy so much hearing their little voices start to grasp larger concepts.

Who this is for

The boys earn character (poker) chips for good behavior and strong character. They lose chips for areas they struggle in and need more attention.

They can spend their chips or save for larger items. I personally do not allow my boys to redeem chips for random toys. Children don’t need more toys. Mine certainly don’t. We allow the boys to pick from family experiences or activities and maybe infrequent trips to the dollar store for coloring books or treats.

The can save for larger ticket items but it will take probably 1-2 months to earn that prize.

Some Words of Caution

If you decide to allow your child(ren) to redeem for toys, make sure it’s something you can sustain. Do you really want to be buying new toys weekly? Only commit to what you can maintain.

Don’t be stingy! Be super generous and positive with their chips! Especially, in the beginning to get them motivated. Making this a positive and exciting process for them to hear and see their progress.

You don’t have to use my print-out (obviously) but make sure to have something to reference. My template is designed to be printed and folded like a menu. So when I’m referencing, it looks like the menu is the “bad guy”. I study it and say, “oh man – this says you lose 4 chips for hitting your brother. That’s a bummer.”

Don’t always make time with you a “transaction”. We allow our boys to redeem the chips for extra cuddle times, making cookies with mom and date nights with dad. But that is considered EXTRA or bonus time. I don’t want my kids to think they need to pay to be with me.

Be consistent! I read a mom in an online forum complain how she had tried “every” chart, sticker, treasure chest and behavior system but it only “worked for a week”. You have to pick whatever system works best for your family structure and personality but STICK WITH IT. No system will work occasionally. To use poker terms, “go all in”. Whatever system you decide, you can’t go half-way.

This is what I used to get started and it cost me around $29. However, you don’t need to print labels or use the stickers making this cost only about $15. If you use your own containers, I’d suggest using CLEAR containers so your child can see their progress. (And for goodness sakes don’t use glass mason jars. Can we be done with the mason jar infatuation? While they may look Pinterest perfect it’s just not suitable for small kids.)

“WHATEVER YOU DO, WORK AT IT WITH ALL YOUR HEART, AS WORKING FOR THE LORD, NOT FOR HUMAN MASTERS.”

UPDATE: We have been using this system for over a month now. It’s been wildly successful. Almost immediately, the tone in our home changed. The boys have been very observant and aware of their behavior. They are encouraging each other and the excitement for “earning character” is amazing!

One of the things they are rewarded for is brushing teeth without me asking. It’s ADORABLE when I hear them whispering and reminding each other because “if Momma says it we don’t get a chip!!”

One of the unexpected benefits was the math component! My oldest (6) has been counting and re-counting them. He’s now perfected counting by 10s and has been teaching his 4yo brother. (see below video.)

A Christmas Tradition: Letter from Dad